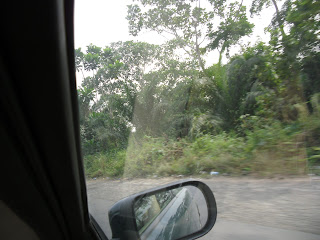 The next morning the security boy opened the door and we drove out. I wasn't happy that we had to drive back for a while before heading to Anambra. I wanted to have a different view and see new places. As we did not know the road, we used to ask the way to the next city we were passing through. At a crossroad Alex slowed down and a bunch of man came close to the car and places wooden beams with nails under our wheels. We couldn't move because they would have spoiled the tires. They said we should show them the documents from the car. They started fighting because Alex  was telling them he leave us alone and choose another car to stop. They told us to park the car on the other side and they were keeping the beams near the tires in case we wanted to drive off. After we parked they brought big rocks and places them in front of the wheels. One of them was holding a rope and he was folding  it around his hand in a noose shape. Charles said he wants to talk with their chief and he went out of the car with him. I did not understand what they wanted because i asked Alex before if he renewed the documents from the car and he said yes and I also knew Chemo took care of it. They gave us a bunch of colorful papers that they said they are required. I took a look at them but I was too tense to realize that most of them were not about driving and cars because I never herd of a Sanitation Certificate for cars. I tried to call my brother and Elena to tell them what was going on in case they will not hear from us again. But there was no network. Bianca was scared and was asking what is happening, Charles came back from the chief and asked me to give him 7000 naira. I gave him and he went back to negotiate with them. He came back for another 3000 naira. Alex was regretting reducing the speed and stopping the car for them because of not knowing the road. It was a deserted area. Other cars were passing fast in that area and I was wondering if they stop their own citizens too or only strangers. Knowing the situation of this country and after reading other stories in internet, all kind of thoughts passed through my mind. Charles came back again saying that we have to buy the papers they required that they say that is possible for others to stop us on the way and he collected another 5000 naira from me. After paying them they came and removed the stones and nails under the car and we drove off.
Posted by Unknown at 1:03 PM

Email ThisBlogThis!Share to TwitterShare to FacebookShare to Pinterest
Labels: dangerous road in Nigeria, holidays in Africa