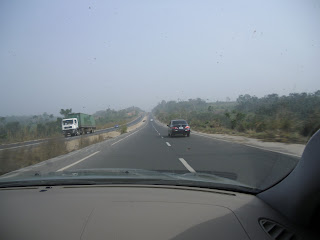 We decided to go to Abuja because we had some things to do at the Ministry of External Affairs and also at the Romanian Embassy located on Nelson Mandela street.We decided to wake up early morning so that we will start going in time. I put my alarm to ring by 5 but Alex stopped it and continued to sleep. Charles promised to wake us by 5 but he didn't make it. I woke around 6.30 and i i had to awaken everybody else. We packed our bags in the car and we said goodbye to the hotel staff that wasn't happy that we are going. In the small parking there were many cars and a Hiunday Camry was blocking our exit.  The staff did not know who was the owner of the car and it took them about 30 minutes to find the person and ask him to come and drive out. We finally left Festac around 7.30. As they don't have many traffic signs this was a journey toward the unknown. I asked Charles if he knows the road and he said that he went to Abuja before but with bus and he slept all the way. We missed the main road they wanted to fallow and being on a highway there way no way to come back so they decided to fallow another route. I bought small bags of cashew with 100 Naira per piece from the ambulant sellers that were taking advantage of the traffic agglomeration, sometimes in the portions of bad road. You could buy anything you needed from them but most were selling soft drinks, cashew banana, cola nut, peeled oranges or even boiled eggs. Charles bought some eggs that morning  and he had to throw them away because they weren't good.  I was usually drinking Coca Cola that was costing 100-120 Naira or Coca-cola water.  The road on the high way was sometimes excellent and we could reach 150 km/ hour but on some portions it was so had to drive with 20 km per hour. As they were still working on the road they had many diversions and from time to time we had to drive on the left lane. I was always careful at what is happening on the road  because we never know when a huge Lorry was entering a dangerous overtaking without  being careful and most of the time we end up suddenly braking and driving off road to avoid an accident.  We were fallowing  a Cisco bus that we knew it was also going to Abuja. Before leaving we also considered going with bus because they knew the road and also because of the kidnapping and robbery risk on the road. Alex brother was saying that the bus drivers were communicating between them and knew when the road is clear.
We stopped at a Tantalisers restaurant because i needed to go to toilet and also we were hungry. i took "Moin Moin", a beans pudding with spices with hot pepper that was containing  boiled eggs. I did not like the "Moin Moin" that they  cooked at that particular restaurant, luckily i also bought 2 donuts and and ice cream so i shared the donuts with Chideraa and finished the ice cream in the car although it wasn't tasting as i was expecting. Alex wasn't happy with the food he ordered either. We left discontented. I was hoping to find the same food is all the restaurants of the brand but I think it depended on the personal recipe of the woman cooking it.
At most of the crossroads  we were stopping the car to wind down the glass and ask people, most of the times ambulant sellers, the way the the next main city we were heading. This was the only way to get the road unless you did not know it very well.  People were friendly and they were giving us good directions. We stopped somewhere to ask a man which is the road to Ibadan,the largest city in Africa, and he said he was going to that city so we took him with us in the car to show us the way. He offered to go with us and show us the exit to Abuja and from there he went back to city with taxi that they call "okada".
Somewhere along the road we saw some human body parts on the roadway. Nobody stopped to find out what happened to the dismembered woman body.  Her face was covered by a veil and she was cut in a few pieces. I did not see any blood so we assumed she was killed. It was a deserted area so it was out of the question for  usu to stop the car.

Email ThisBlogThis!Share to TwitterShare to FacebookShare to Pinterest
Labels: food in Nigeria, holiday, road to Abuja, travel to Nigeria