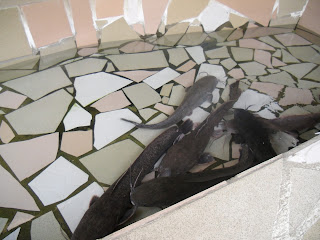 We went to the marriage registry to make sure they had all the required documents . We made pictures for the file and he needed a bachelor document. We paid to get it and the chief made a meeting to make sure that everything is in order.They asked me my name and my address. I did not understand what they actually wanted until realized they all wanted  money. We made an appointment for the next day. We went back home after spending a few good hours in the car because of the traffic. As our own car was in service with Shino we had to book a taxi for the day. We went to eat at Big Fish that evening. Charles called them in advance to order 2 roasted catfish. I drank Smirnoff ice and Alex and Charles took Star after Star as usual. Bianca became friends with the girls and boys working at the bar and she was spending time talking with them. As usual in evening time  the bar was full and extremely noisy. At the 50 inches wide screen t.v., surrounded with the iron anti theft protection that was locked when they closed, they were playing a Nigerian film. Everybody jumped up from their chairs frightened when we herd a big bang. Not long before this event i red an article on internet about a girl that was shot accidentally by the police and i was afraid for my daughter's life. Everybody went back to their chairs as nothing else happened. Charles later found out they were gun shuts fired up in the air by the police in order to stop some undisciplined drivers. Alex called Kingsley's sister and she joined us at the table. They first brought water in bowls and liquid soap to and we washed our hands and after they brought the big plates of grilled catfish with chips and cabbage salad. Everybody was eating with hand but i was always asking them to bring  fork for me. Most of the times i gave up waiting for them and i fallowed them in using my fingers to eat. The fish was delicious as always. We couldn't finish it so we told the to pack it so that Josephine will carry it home. They had big water basins not far from the place we were eating where you could choose yourself the fish you wanted to eat at a price between 1500 and 3500 naira depending on the size. After a few hours we went back to the hotel and i went to sleep while Alex and Charles continued to drink at the hotel's bar.
Posted by Unknown at 9:19 PM